After attending our 1st. EACWP Teachers Training Course in Normandy (July, 10-13), our colleague Daniéle Pètrés (Aleph-Écriture) reviewed the three main pedagogical sessions dealing with our common working topic: the real. Originally published in L’Inventoire, these chronicles are a first hand testimony, which depicts and highlights the fundamentals of our full pedagogical journey. Alain André’s “Out of the ivory tower” workshop is the first delivery of this teachers’ training series

«Writing from the real: Getting out of its ivory tower». Alain André

What is impossible is simply the real (Jacques Lacan). 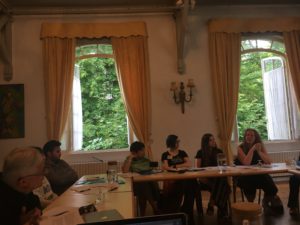 For the opening of the EACWP Teachers Training Course at the Moulin d’Andé, Alain André, founder of Aleph-Écriture and head of education, presented us what it was for him to write from the real. A lecture entitled “Out of the ivory tower”, thus, preceded the practical exercises outside the Moulin d’Andé, of which we have brought back some chronicles.

With such an introduction, Alain André wished to insist on the fact that there is a real difference for everyone and that it is impossible to exhaust it. As most of us write from what they have experienced, seen or read, what better starting point than a workshop based on the experience of what surrounds us, and what our reality is made of ?

But before that, Alain André has come back to this formulation, very common in France “to write from reality”, although this is not the case in other countries. This strictly “real” writing was inaugurated by François Bon and Leslie Kaplan when they published in the 80s respectively “Out of factory” and “L’Excess-l’usine, 1982”. Leslie Kaplan actively participated in the movements of May 1968 on the side of the workers (at the factory), many of her texts were adapted to the theater thereafter.

Closer to us, Nathalie Kuperman was one of the first to take up the subject of the world of work and its plans of systematic redundancies to raise the gross margins of the companies. In his novel, We were living beings (Gallimard, 2010), halfway between reality and fiction, the points of view of the protagonists, union meetings, reclassification plans and personal dramas follow one another .

Closer to a reality less political and social, other writers like Régis Jauffret Fragment of the life of the people (Editions Verticales, 2000). The 56 stories that compose this narrative are here defined by the author: “One can write a novel of one page or three thousand. I wrote the fifty “novels” that compose Fragments of the life of the people following each other, for two years, without the slightest interruption in time. 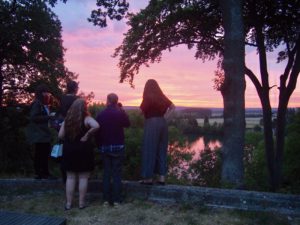 In recent literary news, there is the novel inspired by the life of the Painter Paula M. Becker Being Here is a Splendor by Marie Darrieussecq or 14 July by Eric Vuillard, revisiting the night of July 14, 1789. In a dramatic vein, Laetizia by Yvan Jablonca (Laëtitia or La Fin des hommes is an investigation or “true novel”, published in 2016 by the Seuil publishers), the reading of which poses to some the question: “What proportion of reality are we able to bear? “. In front of the crime on which the historian returns by describing it as closely as possible (one could also quote in this title California Girls by Simon Liberati, Grasset, 2016).

All these examples show how a story can be started from an external material taken from the real world: a news item, a pictorial work, real stories or related facts, a company, a social or political movement could be also part or not.

True stories are today in tune with the times, perhaps in reaction to the virtual reality that creeps in all aspects of our lives (remote surveillance, automation of equipment, virtual reality helmets, etc.)!

Go for a 30-minute stroll and see what surrounds us (in this case the srurroundings of Moulin d’Andé).

Add to this a political or personal concern.

30 minutes, and one page only! 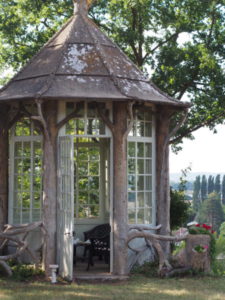 This exercise aims at enabling the writer to document the real by posing his/her own gaze while returning to his/her own obsessions. Because of the contact with “the real”, our perceptions modify the look that is usually made on these obsessions.

Very appreciated, this exercise allows to put a good atmosphere in a group that spreads itself outside, and to nourish the writing of each one thanks to a beautiful energy found again by the walking.

Each story reported by the 15 course participants was very different from each other, which proves that there is above all a look and a tone, a way of seeing, more than one real.

You may also read this article in French at L’Inventoire.

Alain André took the initiative to create Aleph-Écriture in 1985. He is the author of several short novels, short fiction and essays. He conducts writing workshops at La Rochelle for Aleph, of which he is the pedagogical director. From March 2017, he leads a module of the “General training in literary writing” entitled: “Writing from reality”.

L’Inventoire is an online magazine for anybody passionate about literature edited by Aleph-Écriture. It offers interviews with authors, suggestions to get you writing, educational lectures and literature columns.

An initiative from training centre Aleph-Écriture and supported by the European Association of Creative Writing Programmes (EACWP), L’Inventoire is open to writers, readers, teachers of creative writing and literature and librarians. L’Inventoire is a hothouse for literature, reflexivity and collaboration.