After attending to the annual conference (November, 10-13) of the National Association of Writers in Education (UK), our colleague Chiki Fabregat (Escuela de Escritores) shares her experience and personal journey from Madrid to York in this brave, transparent, fun and encouraging account 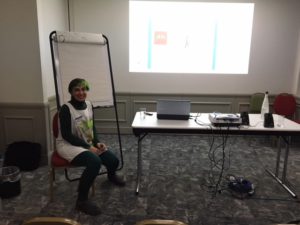 A few months ago I was invited to attend the annual conference of the National Association of Writers in Education (NAWE) in York. Driven by an enthusiastic impulse (as it happens to me often), I said yes.

English is my big unfinished business, so, on November, 10 I planted myself in the  Madrid airport with my red suitcase regretting, indeed, the moment I accepted the invitation. My red suitcase was registered, taken from one place to another and put it apart as, apparently, did not fit in any place. So both of us (my red suitcase and I) became tiny, thinking that, perhaps, we had made the wrong decision.

We ran all the way through Heathrow Airport, we ran all the way through the London Underground and crossed, running all the time, the Kings Cross station without even being able to make a picture of the two of us on Harry Potter’s platform 9 3/4. We even left a paid coffee in a street stall because the train to York was about to leave and we could not wait until the machine spit the blessed cappuccino. 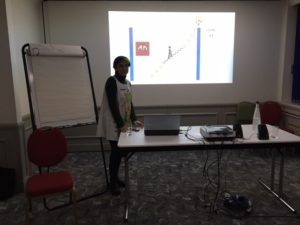 But, once we arrived to York, all that haste, all the nerves, all the fear stayed somewhere outside the walls. When a city welcomes you with such Medieval corners like in a fairy tale hidden at the edge of the river, it is impossible not to start feeling magically sheltered and safe.

Even if the hotel receptionist did not find my reservation at first and even if my room had a green neon surrounding the headboard of the bed, once I entered into the classroom, everything became a funny anecdote. A dozen of people were waiting for me to tell them why I think that letting play the child we all have been is the only way to actually teach and learn.

Tiny, with my green hair and my doll dress, I started to grow up there just because the people I was talking to really wanted to hear me. I started to grow up there just because English is not a problem when there is a real will of understanding each other. Even my childish Power Point with children’s drawings and weeping books seemed great to them. We contrasted the Spanish and the British educational system to reach the conclusion that we all do the best we can, the best institutional and government education let us do. And we do it because we love teaching, because we do not conceive a better way of sharing than teaching and learning. 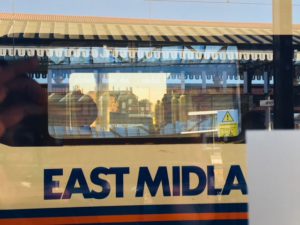 In a three-day marathon, I attended to a wonderful workshop on teaching tools; to another on translations of poems in Urdu, Panjabi and Persa; to a highly interesting reflection on why minorities are little represented in the main characters of literature for young people and I even dared to be part of a round table discussion to improve the teaching of writing in schools, in England. And not once, not even once, I felt that nobody looked at me badly because I did not speak their language, perfectly.

My red suitcase welcomed me every night with its stomach opened, which I filled up with papers, books and loose phrases, with friendly faces and smiles. I shared all kind of tables with writers, with teachers, with people in love with what they do. We laughed at comparing pronunciations, I tried to teach a Swedish man to say my name (Chiki) while he insisted that I had to learn back how to pronounce his. Lorena and I (because my red suitcase and I were all the time with Lorena) were jocking about the York ham, as there is in Spain a so-called “York ham”, which, of course, does not exist in York (just like our Spanish “French omelet” and “Russian salad”). I froze during every cigarette, but I also made friends, because smoking in the door of a hotel strengthens friendship either in Madrid, York or in the Conchinchina. I gave up, also, trying to make British people to understand that their lunch and dinner schedules are unnatural (although, afterwards, I was almost convinced that dinner is actually not that bad at six in the evening).

We returned, my suitcase and I, without complexes. We retraced our steps back on the road, this time, without racing. As a strange and funny metaphor, a very kind worker of the airline decided to move us to bigger seats, to that VIP area where suitcases have a huge hole to stay. The plane had problems to take off, but it did not matter. We were waiting about an hour, but it did not matter. We arrived to Madrid late, when the subway and commuter trains no longer worked, but it did not matter because we came, my suitcase and I, excited and eager to bring into practice what I learned and to teach again, to share. 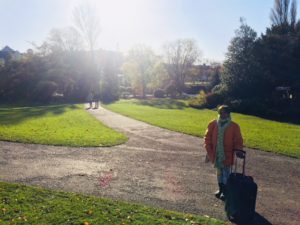 This weekend, I understood that those of us who devote ourselves to words, those who live because of words and for words, cannot hide behind the absurd and isolated self-center-ism of a unique language (even if the country we speak it in is either tiny or huge).  I, also, understood that we cannot hide our fears by wrapping them up to someone else: to a red suitcase, for instances, without going any further.