On the 14th of September, the former Caserma Cavalli will host a party with the motifs of a familiar “renaissance”: the Scuola Holden reborn 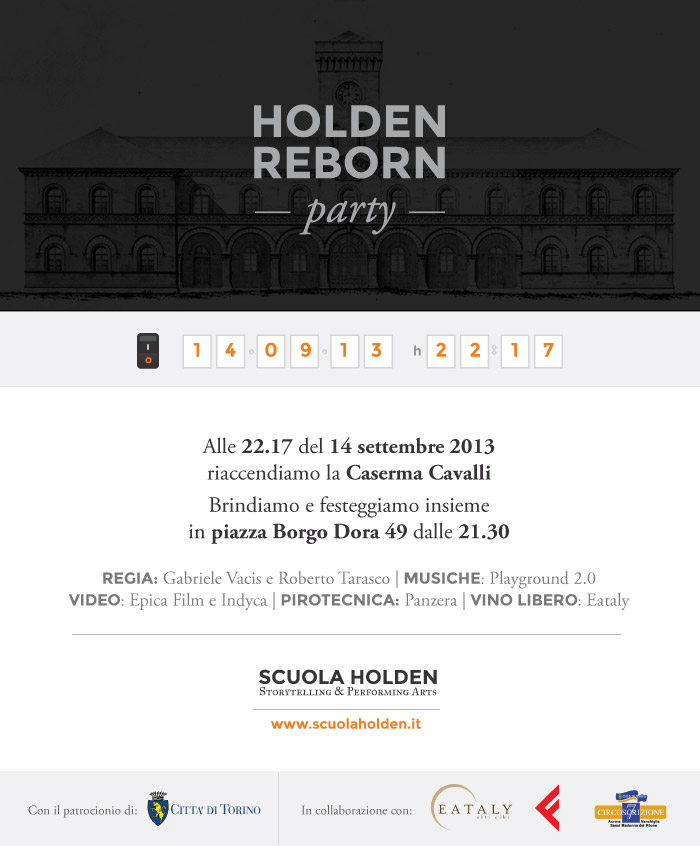 It’s being a long summer. Our schools went almost quiet over July and August as though they were enduring a fictional winter. Our teachers traveled away chasing a fair sun lump from Crete to Galicia, Puglia to Côte d’Azur, the Austrian alps, Riga, Gotland, Beirut’s shores. Now, after finally reaching September along with the first signs of autumn, it seems, paradoxically, as a new spring were about to burst and warm our schools up. Although, the feeling of finding them reborn is not merely rethorical.

Aleph Écriture has launched a new Creative Writing magazine: L’Inventoire. Escuela de Escritores recently inaugurated a new on line home, its new web page. The Vienna Poetry School has offered new courses for our Teachers’ Interchange Program involving some key names as Sainkho Namtchylak or Juergen Berlakovich. Les Ateliers d’écriture Elisabeth Bing is organising new activities for our project year (to be revealed soon). Additionally, as a plus of joy, this  Saturday 14th of September, Scuola Holden, our Holden, will acomplish its promise.

After several months of a passionated extreme make over while caring the goods of some well preserved ruins, the former Caserma Cavalli quarter will divest and reveal from its inner core the new campus of the Holden reborn. The invitation to the much awaited celebration along with the Holden’s resolutions for the rebirth are glaring:

A house is alive when the lights are on, when behind the lighted windows shadows of faces glimpse, shadows of greetings, kisses and steaming pots. A house is alive when the lamps glow along with the chandeliers, the candles and the flames in the fireplace. At 22:17 on 14 September, we’ll rekindle the Caserma Cavalli. We’ll party, we’ll toast and chat. We’ll light up the night with fireworks. A bright start because it brings a change, and any change illuminates new corners of the world. We’ll wait for you in Piazza Borgo Dora 49, from 21.30 to celebrate, and start all together.

It’s being a long summer, but bright enough to be all reborn for the new year.

Long life to the new Holden and to the coming EACWP projects.