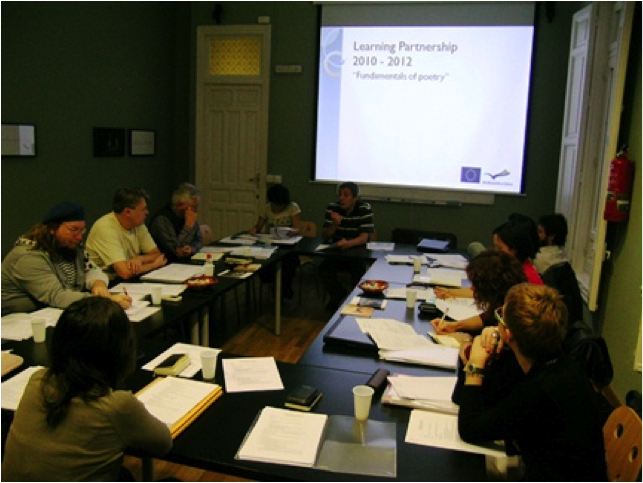 During the meeting in Paris (Nov, 2012), the idea of providing a structured interchange system within the Association was introduced and, thereby, proposed as part of the agenda at the Symposium in Orivesi (May, 2013). Meanwhile, Scuola Holden suggested to outline a first draft list, which would postulate some teacher’s courses that might be potentially interesting to stimulate the interchange program amongst EACWP schools during the next months.
Currently, there are 45 teacher’s nominations and more than 50 different courses. Aleph Écriture and Escrever Escrever, for example, have focused some of its proposals on the diverse possibilities of Creative Writing within the audiovisual and technological domains such as Cinema, Photography and Internet itself. Scuola Holden headed for both fairy tales and travel writing while Orivesi College held on more restrained topics: non fiction writing and literary criticism and essay. Escuela de Escritores offered a wide spectrum of academic reviews (from Latin American up to North American tradition going East to Russian and German legacy) as well as some literary variations out of the strict narrative’s sight as play-writing and poetry. Literature Akademy favored intercultural writing and the Atelier d’écriture Elizabeth Bing framed its main courses in teacher’s training. Furthermore, some individual members as Linda Lappin and Amir Or presented their proposals concerning topics related to both mythic imaginary and poems translation and edition.

The Teacher’s Interchange Program list, as it has been agreed, will be open to changes and updates while the EACWP continues to figure out, before its coming Symposium, the terms and conditions this initiative may be successfully developed.

During the last two years before the program was formally conceived, the EACWP has encouraged some academic interchanges. In February 2011, professor and poet Risto Athi from the Orivesi School of Arts visited EdE to impart a seminar on “Creativity” as well as Javier Sagarna  participated at Orivesi as a teacher of two courses in November 2011: “How to write short stories” and “The structure of short stories”. The success of both academic experiences set the basis for the later evolution of the project.