During  the 18th, 19th and 20th of June, the Vienna Poetry Academy will open up two different courses in English for all international students with two world wide known contemporary artists. Registrations are still available for new participants 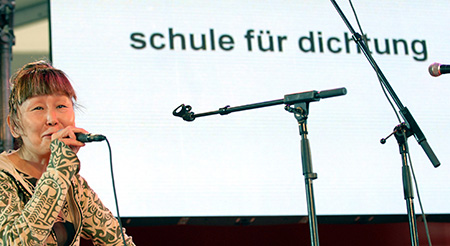 Voice and sound improvisation is the name of the course leaded by the performance artist, poet and overtone singer Sainkho Namtchylak.  On the 18th and 19th of June, Namtchylak will focus her class on overtone singing and improvisation techniques in contemporary performance art . Additionally, in 5 teaching units she will also deepen into different techniques for voice development based on traditional central Asian overtone singing and the contemporary art of sound performance. Finally, the results of the class will be presented during Sainkho Namtchylak’s poetry performance on the 21st. of June at the Ateliertheater. 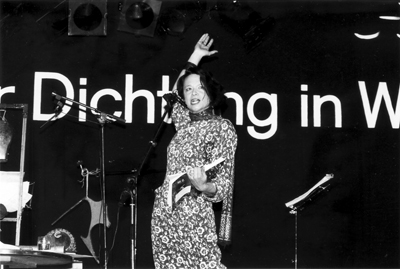 Subsequently, on the 20th of June, the Vienna Poetry Academy will host Anne Waldman, the American performance artist and co-founder (together with Allen Ginsberg) of the Jack Kerouac School and her proposed course Going local: poetry in performance. Also unfolded in 5 teaching units, the aim in this workshop is to experiment with ways our poetry guides us to performance ideas in composition. How do we want to hear ourselves and our poems? is one of the key questions to bring up. In this course, students will start with vocalization of selected texts of others in an ensemble experiment, and then create their own pieces (bi or multi-lingual) through a series of “experiments of attention”. Furthermore, Waldman will invite another as writers, as voices, and as musicians in order to consider writing as score or libretto, work with spechstimme , and create a 4th dimension wall of sound.  The results of the class will be also presented during Waldman’s poetry performance on the 21st. of June at the Ateliertheater.

Additionally, as part of a cooperation with the Vienna Poetry Academy, Anne waldman will be this year teaching at the Summer Academy in Venice from 23 – 29 june 2013.

For more information about the courses, please, visit:

“The narrative nature of sound improvisation” – how to expand your inner voice and open new possibilities of intonation in your improvisational singing (experimenting with an old tradition of fairytales from Siberia), overtone singing and narration.

The myths of tuvan shamanism are the greatest achievement of the thought of central Asia. Shamanist myths about the white sky, for example, present a light-giving & life-giving beginning, and that is why the word used is “kyshyning adazy”, literally: ‘man’s father’.

The white sky gives light, warmth, rain or snow, “sut deg ak deer” – white sky is man’s beginning. as an illustration, here is one myth about the sky, narrated by the storyteller sotpaa sat in 1944.

“In this world, all plants & human beings have their father & mother, the deity created it this way.

Deity, man’s father, is the sky, that is what they say.

From the very beginning the sky was man’s father. so people say.”

The roots of myths about the land or man’s mother go back to pagan antiquity. The main character in these myths is “Cher”. The Earth.

Here is one more example of a myth written down from the words of sotpaa sat:

“Once upon a time, when the plain thing used to float by like the wind and the round thing used to roll by like a ball, three storms were raging in this world. First the fire storm blazed & covered all the world with flames. Then the water spout caused an overflow & gained a victory over the fire storm & thereby put out the fire, so they say. Finally the tempest began & razed the high mountain of sumber-uula. The speck-earth, having emerged from the sumber-uula taiga, which the tempest had destroyed, crushed the water-spout & dried out the overflow.

People say the tempest created this world. In the place of the tempest, rivers, mountains, valley, seas & mankind appeared. So they say.

Since that time, father-sky & mother-earth coexist & cannot live without each other. If the fire of the white sky goes out & the heavenly drops of rain vanish, then all things that are alive & all beings on the earth will perish…” Such is the symbolism of the myths about the sky & the earth or about “man’s father” & “man’s mother”.

The cultic notions of shamanist myths still live on. Even today, every tuvan of old age pronounces the following verse, making an offer of fresh tea to the ghost of the earth:

“Mother-earth, i beg you, give me some happiness.

Mother earth, i beg you, present me with luck.

Mother-earth, i beg you, protect & take care of my children.

Mother-earth, i beg you, protect my all home & native”.

Since the 1960s, Waldman has been an active member of the Outrider experimental poetry community as a writer, performer, collaborator, professor, editor, scholar, and cultural/political activist. She has also been connected to the Beat poets as well.

Born in New Jersey, Waldman only lived in New Jersey very briefly. She was raised on in New York, and received her B.A. from Bennington College in 1966. During the 1960s, Waldman became part of the East Coast poetry scene, in part through her engagement with the poets and artists loosely termed the Second Generation of the New York School. During this time, Waldman also made many connections with earlier generations of poets, including figures such as Allen Ginsberg, who once called Waldman his “spiritual wife.” From 1966-1968, she served as Assistant Director of the Poetry Project at St. Mark’s; and, from 1968–1978, she served as the Project’s Director.

In the early 1960s, Waldman became a student of Buddhism. In the 1970s, along with Allen Ginsberg, she began to study with the Tibetan Chogyam Trungpa Rinpoche. While attending the Berkley Poetry Conference in 1965, Waldman, with poet  Lewis Warsh, was inspired to found Angel Hair, a small press that produced a magazine of the same name and a number of smaller books. It was while she was attending this conference that she first committed to poetry after hearing the Outrider poets.

In 1974, with Trungpa, Ginsberg, and others, Waldman founded the Jack Kerouac School of Disembodied Poetics at the Naropa Institute in Colorado (now Naropa University), where she remains a Distinguished Professor of Poetics and the Director of Naropa’s famous Summer Writing Program.

In 1976, Waldman and Ginsberg were featured in Bob Dylan’s  film, Renaldo and Clara. They worked on the film while traveling through New England and Canada with the Rolling Thunder Revue, a concert tour that made impromptu stops, entertaining enthusiastic crowds with poetry and music. Waldman, Ginsberg, and Dylan were joined on these caravans by musicians such as Joan Baez, Joni Mitchell, Eric Anderson, and Joe Cocker. Waldman reveled in the experience, and she often thought of recreating the poetry caravan.

Waldman married Reed Bye in 1980, and their son, Edwin Ambrose Bye was born on October 21, 1980. The birth of her son proved to be an “inspiring turning point” for Waldman, and she became interested in and committed to the survival of the planet. Her child, she said, became her teacher. Waldman and Ambrose Bye perform frequently, and the two have created  Fast Speaking Music and have produced multiple albums together.

Anne Waldman at the Miami Book Fair International of 1988

Waldman has been a fervent activist for social change. In the 1970s, she was involved with the Rocky Flats Truth Force, an organization opposed to the Rocky Flats nuclear weapons facility ten miles to the south of Boulder, Colorado. With Daniel Ellsberg and Allen Ginsberg, she was arrested for protesting outside of the site. She has been a vocal proponent for feminist, environmental, and human rights causes; an active participant in Poets Against the War; and she has helped organize protests in New York and Washington, D.C.

Although her work is sometimes connected to the Beat Generation, Waldman has never been, strictly speaking, a “Beat” poet. Her work, like the work of her contemporaries in the 1970s New York milieu of which she was a vital part—writers like Alice Notley and Bernadette Mayer, to name only two—is more diverse in its influences and ambitions. Waldman is particularly interested in the performance of her poetry: she considers performance a “ritualized event in time,”[5] and she expresses the energy of her poetry through exuberant breathing, chanting, singing, and movement. Waldman credits her poem, Fast Speaking Woman, as the seminal work that galvanized her idea of poetry as performance. Ginsberg, Kenneth Koch, Lawrence Ferlinghetti – all encouraged her to continue to perform her poetry.[6]

Waldman has been a Fellow at the Emily Harvey Foundation (Winter 2007) and the Bellagio Center in Italy (Spring 2006). She has also held residencies at the Christian Woman’s University of Tokyo (Fall 2004); the Schule für Dichtung in Vienna (where she has also served as Curriculum Director in 1989); the Institute of American Indian Arts in Santa Fe, New Mexico; and the Stevens Institute of Technology in Hoboken, New Jersey (1984). She has served as an advisor to the Prazska Skola Projekt in Prague, the Study Abroad on the Bowery (since 2004), and has been a faculty member in the New England College Low Residency MFA Program (since 2003). She is the recipient of grants from the National Endowment for the Arts (NEA) and the Contemporary Artists Foundation, and the Poetry Foundation. With writer and scholar Ammiel Alcalay, she founded the Poetry is News Coalition in 2002. Waldman also won the International Poetry Championship Bout in Taos, New Mexico twice. More recently, in 2002 she co-founded the Poetry Is News collective with writer/scholar Ammiel Alcalay.[7]