In cooperation with Orivesi College of Arts (Finland) and thanks to the Erasmus+ program, Lorena Briedis, our EACWP community manager and colleague from Escuela de Escritores (Madrid) is in her last week of her job shadowing experience with Risto Ahti, one of the most remarkable Finnish and European poets as well as one of the most worldwide noted Poetry teachers. In her weekly Finnish diary, Briedis tells us more about her meeting experience with Ahti and her journey up to this pedagogical exchange 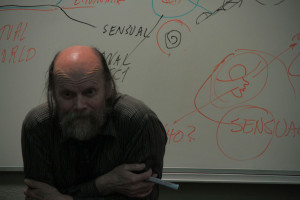 In order to start seriously talking  about why I traveled to the North Pole almost two months ago, I guess, I should introduce, then, the man whom I came to follow up here. This is him: Risto Ahti.

I met Risto for the first time in May 2013, at the symposium of the European Association of Creative Writing Programs (EACWP). Before leaving for Finland, in one of the preparatory meetings, Javier Sagarna —both the director of the EACWP and Escuela de Escritores (Madrid)— introduced me to Risto in a way that I felt almost like a warning: «You will know Risto, the Jedi Master of Orivesi College of Arts ». I think all I can say about Risto, from now on, is nothing but a confirmation of that lucid epithet and that necessary warning.

Once in Orivesi, on the eve of the conference that Risto was about to impart that evening, I remember the powerful impression I had when Javier introduced myself personally to him. Above all, what amazed me the most was his energy, a kind of vibrant and resonant aura. Since then, every day I sat down next to him on each and every meal: the spring of 2013 and then the fall of 2014 when we returned to Finland for the II Pedagogical Conference of the EACWP. Since then, we became friends (or something alike) and I wanted to become his witness, his disciple or his shadow —job shadow as it is said in English— (or something alike).

To help myself with my spoken portrait (in case you ever come across with him on the street), I will say that he is a 66 years old man (Lahti, 1949) with a «Socrates beard» —as the students of Oriveden Opisto say—, bold —only half way as you will see in the picture— and wearing a black beret made in Andorra. He speaks in parable, eats bird portions and I know that in summer he also likes to smoke salmon as that spring of 2013 I surprised him in his garden in his underwear when I went to his house in Tampere to say goodbye.

Now a days, I must say that I am very grateful to Javier for having warned me previously about my encounter with Risto because for such meetings certainly we have to be aware, given that a terrible danger exists: not to be sufficiently awake. It’s like when we are about to face a true work of art. I think, for example, when I saw and listened for the first time to Wagner’s Tristan at the Teatro Real in Madrid or when I read The Nightwood by Djuna Barnes: I appreciated so much that those who approached me to both experiences warned me before because in these sort of spiritual meetings that are destined to us, somehow, we always take the risk to die. Most likely we’re going to die, yes, but, to redeem ourselves (maybe). Most likely we’re going to die, yes, but to be enlightened (maybe). And the sidereal missing, the cosmically unforgivable thing would be this: not to be sufficiently awake.

In this sense, both Risto’s psychic and spiritual reach has the character and the mastery of the teacher, the shaman and the artist. In him it can be recognized that human work of art of a man when he has redeemed himself and has probably met his god in hell. And that can be said at first glance by looking at him in the eyes: a fiery blue eyes, lit by a heavenly fire. «Once, someone asked me —he told me recently, one day after class—: Risto, why are you burning? Why are you so full of fire? And I said: “I am full of fire because I do not know why I’m full of fire.”»
This is Risto Ahti. A poet born from the marriage between heaven and hell, a visionary as one of his angels: William Blake. A man alive, very much lively and alive, as Lorca —another of his duendes— finally, a man intensively awake, always on the hunt  of the miracle. I’m not awake on purpose —he says in «Aria», one of his poems from Narcissus in winter— (like some citizen with tidy affairs): / I’m awake with the despair of superterranean love.

This is the man for whom I made my journey up to the North Pole and the fundamental reason I’ve come to live here in Finland for these months, amongst these boreal northern deserts. I do not know exactly what I came here for, what I am exactly looking for. I do not know even how much or how little I can learn from Risto, but I guess I do not need either to know it.

I rather prefer to know it all by intuition.