Linda Lappin (University of Rome La Sapienza) inaugurates our project Prompts by proposing an experiment around the archetypal resonance of keys. This writing exercise tackles into memoir and concludes in fiction throughout four different phases. Lappin performed this experience with American students in a abroad program in Viterbo, Italy 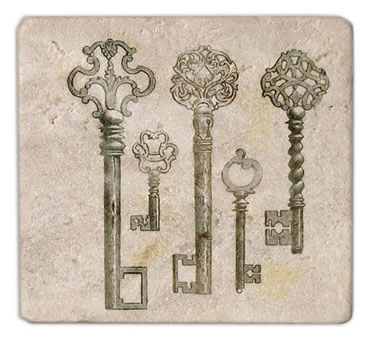 Narrative is encoded in objects.

All this – Italy, the windy morning, the vines laced about the pillars,

from the china bowl on the mantelpiece.

This prompt evolved from a creative writing class I taught for American students enrolled in the USAC study abroad program in Viterbo, Italy.  For a class assignment, I asked students to write about an unfamiliar object they had encountered in their domestic space since their arrival in Italy. Espresso coffee pots, bidets, and food products were common subjects  sometimes eliciting puzzlement and comedy,  but keys inspired some of the most interesting pieces produced by the class.

Never had they seen such a variety of shapes, weights, sizes, as the  keys to their apartments in the medieval town center,  fitted to complex lock mechanisms, some quite archaic, appended to equally fascinating and in some cases truly ancient doors.  For these young writers, keys   offered both archetypal resonance and great metaphorical range, inviting day dreams in the Bachelardian sense, of discovery,  secret spaces and hidden rooms, which in turn were related to their experience of discovering a new culture and a new self operating in that culture. In addition, keys are charged with the drama and anxiety related to loss, misplacement, theft, imprisonment.

The exercise begins as an experiment in memoir/ life-writing and concludes with fiction.

Phase 1:  To do at home before class

1. Find or simply remember a key that was important to you in the past.  It could be the key to a house, a room, a drawer, a cupboard, an elevator, a car, a chest,  a safe, a suitcase, a diary, jewelry box.  Imagine holding the key in your hand as you are about to open the lock to which it is fitted  — what emotion dominates? Expectation, dread, fear, excitement?

2.  In your imagination, perform the gesture of turning the lock and opening. What’s inside?  Describe in all particulars what you find – as soon as the door or lid swings open or the ignition switches on.  Images of smell and touch are important here.  Where are you standing or sitting as you open it?  Describe the atmosphere around you. Write a short descriptive passage describing the moment  of opening and the contents you have unlocked.

3. Try to remember the last time you turned the key in the lock to close it and write a short passage incorporating any emotions, sensations, or episodes connected to that moment.

4. Bring all these threads together  by  writing  a short passage connecting either the key or the contents it unlocked to something that happened later in your life.

1. Find an interesting key and bring it to class. It doesn’t have to be the one in phase 1.

2. Exchange keys with someone else in the class.

3. Using points 2 and 3  described above, write a short piece of fiction based on the key you have been given.

Students read their passages of  life writing and fiction aloud to each other and discuss their responses.

Students are asked to bring in any short passages  by other authors of  fiction, nonfiction, fairy tales, myths, dealing with keys , opening, or locking up, being locked in or locked out which will be read and discussed in the next class.