The National Association of Writers in Education celebrated its conference in Stradtford-upon-Avon (November, 2016) in the year of Shakespeare’s 400 anniversary. Javier Sagarna, Gale Burns and Lorena Briedis participated as the speakers invited in representation of the EACWP

From the 13th to the 15th of November, over 150 teachers, researchers and writers coming from all parts of the UK, Europe and overseas attended the event eager to participate, make new contributions and enjoy the rich range of lectures, workshops, talks and presentations of the conference.

In the opening of the event, Celia Brayfield expressed her gratitude for the enthusiastic responsiveness of participants and highlighted “some good news” in relation to the journey of Creative Writing in the UK in the past year. Over her intervention, Brayfield mentioned the official validation of Creative Writing as a proper academic subject in the context of undergraduate and PhD researches.  Also, she pointed out the significance of Creative Writing as a broaden and extended discipline throughout all aspects of life (schools, prisons, nursing homes, hospitals…) as well as its valuable role in reinforcing creativity and bringing together young writers as collaborative networks have been consolidated. “In sum, the great new is that Creative Writing grew up in the past year”. 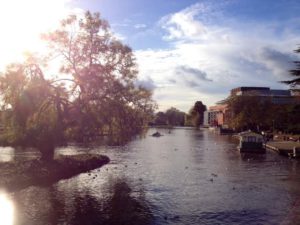 Additionally, Brayfield introduced and welcomed Seraphima Kennedy as the new coordinator project of NAWE, who was, also, one of the principal organisers of the conference. Seraphima Kennedy took the floor and pointed out some of the highlights of the conference. Also, Kennedy welcomed the very first conference session from NAWE’s new PhD network as well as the consultation for the new Paper Nations Young Creative Writer Award (founded by Arts Council England).

The conference program was split into six loose strands with a string of workshops focusing on craft. With the Shakespeare connection in mind, an exclusive screening of excerpts was offered from the very latest film of Macbeth, with director Kit Monkman, in conversation with Judith Buchanan, one of the world’s leading authorities in Shakespeare on film. For the evenings, poet Patience Agbabi and novelist Kit de Waal were the speakers invited, followed by a Q&A and a book singing.

Ultimately, Javier Sagarna, Gale Burns and Lorena Briedis presented the EACWP, underlaining our aim of working for a multicultural and multilingual project, where all the European diversity may be valued and represented.