Escola d’Escriptura is dedicated to the teaching of the arts and professions related to words. Its courses are aimed to help people with a love for language and literature turn their passion into a profession, by means of a personalized attention, in groups of a strictly limited number of people. Its teaching staff is composed of writers with a prestige in the Catalan literature, and it often holds collaborations by named authors of fiction, non-fiction, drama, poetry and songwriting.

Since its foundation in 1998, Escola d’Escriptura has become increasingly active, and it has seen the growth of its management staff (currently seven people), its teaching staff (composed of more than sixty teachers) and its prestige; nearly 9.000 students have attended this School and many of them have made their first steps in a promising literary career or have become professional in the publishing world.

This school offers more than sixty courses, taught in Catalan or Spanish, in a traditional or in an Internet way, about Writing, Editing, Literature and Storytelling. It also organizes several other cultural and literary activities and keeps tight relations with several cultural entities, universities and the public administration. 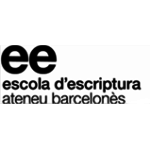