Founded in 2001 by Carlos Lutteral and Blanca Herrera (under the name of Escuela del Relato – School of Storytelling), Casa de Letras – Escuela de Escritura y Oralidad (CdeL) is a non-lucrative association, first academic organization in Buenos Aires (Argentina) dedicated to the teaching and development of creative writing, orality (artistic storytelling, introduction of narrative thought in teaching and all communicative professions), reading, and other disciplines related to the universe of either written or oral word.

Its main academic proposal is based on three methodological programs:

In addition to this, Casa de Letras offers a diversity of seminars and workshops related to the written and oral word, which widen and deepen the contents of the main programs.

As a part of its academic activity, Casa de Letras organizes lectures and interviews with writers, poets and other prominent personalities in the literary field.

It also develops courses specially designed for training teachers in universities and schools on how to use the narrative thought to achieve a closer communication with their students, and it participates in social responsibility programs, through storytelling to children in public schools.

Specially designed intensive courses are also offered to students/teachers coming from abroad with the specific purpose of acquiring the tools of its programs in an intensive shorter form (Spain, U.S.A., and Canada).  These courses are dictated both in Casa de Letras and other universities or academic institutions.

The production of theatre and storytelling performances represents another area of interest, being as they are profoundly connected to the written and spoken word.  Producing them is Casa de Letras’s way to pursue human gatherings to share a live artistic experience.

Casa de Letras sustains the following values: the pre-eminence of cooperation above competition; the development of the creative capacity that everyone has, to nurture his/her natural talent; to consider effort, error and disposition to change, as key issues of the learning process; to promote commitment, team work and, fundamentally, to transmit respect for others and for the value of differences.

The vision of Casa de Letras is to establish a centre from which artistic expression is projected as a transforming experience for both individuals and society, and culture is thought to be the foundation of human development. 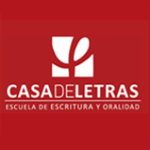