In her presentation during our Pedagogical Conference in Paris (Nov, 2012), Marianne Jaeglé (Ateliers d’écriture Elisabeth Bing) reviewed how the different workshops at the French school are creating prompts structured on a spine of patterns. Jaeglé also cleverly explained the principles underlying this highly interesting pedagogical perspective 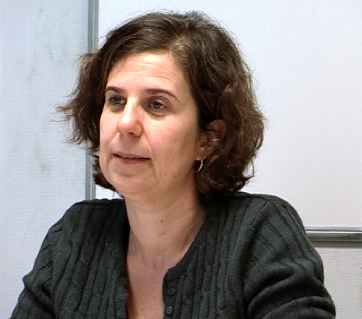 Prompts: between technical ability and desire for writing

What can we consider as being a good prompt? According to which criteria will allow us to evaluate a prompt? I found two of them.

I think that the first criterion to evaluate the prompt would be that it helped the writer to write a better text than the text he would have written without the prompt. Better in every possible way: more efficient, with a better structure, more original, more personal, etc. And the second criterion is that the prompt helped the writer himself to become better: that means more self-confident, more daring, more conscious of what he does, more independent etc.

According to me, we can consider as a good prompt a prompt that participates in the construction of the text and/ or the prompt that contributes to the writer’s expertise and autonomy. That means: a good prompt stimulates the desire of writing and gives a reusable teaching, what we could call a motif or a pattern.

How to create a prompt that makes the writer and/or his text better?

What we do is to find a published text that contains a motif, in the artistic sense of the term, that means at the same time a reason to write and an element with an aesthetic unity.  To give a prompt, we read the text, define the motif, and propose to the students to write, drawing inspiration from it. I give you an example of the kind of prompts we create and we use: this prompt can be used with people writing autobiography or novel.

Pierre Loti and the encounter with the sea

In le Roman d’un enfant, the book named the Story of a child, the famous French writer Pierre Loti tells about the first time he saw the sea, when he was a child. Nothing very meaningful happens: the meeting in itself is quite trivial. The child is maybe five years old; he climbs up a dune, he sees the sea, he feels fear at the idea that the sea can capture him and he runs to his mother. End of the chapter. Despite this trivial aspect, this meeting is to be decisive in his life, because as an adult, Pierre Loti happened to become a sailor. Most of his books are about the sea, the travels he made on it, etc.

So I usually read the text about that encounter: then, I propose to write not about the theme of the text (i.e. the first time you saw the sea) but about the pattern, the narrative element, making a whole in itself that this text includes: the pattern of “the first time that reveals itself afterwards to be decisive”.

What kind of teaching can we give with a pattern?

Several kinds of patterns exist: a pattern can be a form, a specific technique, a structure, a way of writing… etc. Some examples:

What does it mean to use a prompt based on a pattern?

In Préface à une vie d’écrivain, Alain Robbe-Grillet defined literature as a
process of constant rewriting: “Art in general and more specifically literature would be a communicable chain, always trying to reproduce the same things, but differently. The past work is perfect, but as it fell into ruin, it must be done again.”

In a creative writing course, giving a prompt based on a published text and including a pattern does not mean that the teacher suggests to imitate the published text: it wouldn’t be of any interest. It means proposing to the student to build again what has fallen into ruin. The pattern will be offered to students as a ready-made link in the chain of literature. What do you have to write about that link? How can you make it new? How can you make it yours?

What are the advantages to use prompts based on a published text including  a pattern?

I was very surprised when I realized that Natalie Goldberg hardly ever mentions any writer nor any published text in her books Writing down the bones and Thunder and Lightning.

What difference does it make to use a published text in giving a prompt?

Other advantages of quoting published texts:

The consequences on the teacher’s practice

The difficulty for the teacher is to find texts that are both stimulating for the desire to write and instructive in terms of technical writing, to identify the pattern and to offer it to the students. To find patterns that are sufficiently wide to suit all the students and sufficiently precise to create the desire of writing.

“A writer is someone who knows how to proceed to his own childbirth” said a French writer. We could also say “a writer is someone who is able to create his own patterns for writing”.
The bet is that after a certain amount of patterns, a student should be able to become the writer he means to be, and also to become independent from the teacher and the creative writing course.

What can we consider as a good prompt? The image that comes to me is the vertebra.
All the beginners are invertebrate. One prompt after another, without knowing it, without even feeling it, the prompts build their vertebral spine.

The Story of a child, by Pierre Loti

I will now endeavor to explain the impression that the sea made upon me at our first brief and melancholy encounter, which took place at twilight upon the evening of my arrival at the Island. Notwithstanding the fact that I could scarcely see it, it had so remarkable an effect on me that in a single moment it was engraven upon my memory forever. I feel a retrospective shudder run through me when my spirit broods upon the recollection.

We had but newly arrived at this village near St. Ongeoise where my parents had rented a fisherman’s house for the bathing season. I knew that we had come here for something called the sea, but I had had no glimpse of it (a line of dunes hid it from me because of my short stature), and I was extremely impatient to become acquainted with it; therefore after dinner, as night was falling, I went alone to seek this mysterious. The air was sharp and biting, and unlike any I had experienced, and from behind the hillocks of sand, along which the path led, there came a faint but majestic noise. Everything affrighted me, the unfamiliar way, the twilight falling from the overcast sky, and the loneliness of this part of the village. But inspired by one of those great and sudden resolutions, that come sometimes to the most timid, I went forward with a firm step.

Suddenly I stopped overcome and almost paralyzed by fear, for something took shape before me, something dark and surging sprang up from all sides at the same time and it seemed to stretch out endlessly. It was something so vast and full of motion that I was seized with a deadly vertigo—it was the sea of my imagining! Without a moment’s hesitation, without asking how this knowledge had been wrought, without astonishment even, I recognized it and I trembled with a great emotion. It was so dark a green as to be almost black; to me it seemed unstable, perfidious, all ingulfing, always turbulent, and of a sinister, menacing aspect. Above it, in harmony with it, stretched the gray and lowering sky.

And far away, very far away, upon the immeasurable distant horizon I perceived a break between the sky and the waters, and a pale yellow light showed through this cleft. (…) We communed together a moment, one with the other—I was deeply fascinated. At our first encounter I am sure I had a nebulous presentiment that I would one day go to it in spite of my hesitation, in spite of all the efforts put forth to hold me back,—and the emotion that overwhelmed me in the presence of the sea was not only one of fear, but I felt also an inexpressible sadness, and I seemed to feel the anguish of desolation, bereavement and exile. With downcast mien, and with hair blown about by the wind, I turned and ran home. I was in the extreme haste to be with my mother; I wished to embrace her and to cling close to her; I desired to be with her so that she might console me for the thousand indefinite, anticipated sorrows that surged through my heart at the sight of those green waters, so vast and so deep.

2 Responses to "Marianne Jaeglé. Prompts: between technical ability and desire for writing"