From October, 3 to October, 6 (2018) our colleagues from the Vienna Poetry School (sfd) along with the European Beat Studies Network (ebsn) will welcome worldwide participants willing to take part in the different activities and discussions concerning beats and politics, past and present 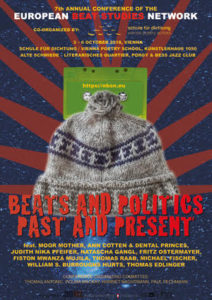 Beat culture can be regarded as a manifestation of political protest against the oppressive and anti-freedom of expression political atmosphere of the 1950s, which culminated in several obscenity trials (howl, naked lunch, fuck you/ a magazine of the arts). Examples of later beat political activism include William Burroughs and allen Ginsberg’s participation in the protests at the 1968 democratic national convention in Chicago, Ginsberg’s arrest at the anti-nuclear rocky flats blockade of railroad tracks in 1978, and his participation at numerous protests against the Vietnam war.

The European Beat Studies Network conference focuses on the relevance of the beat generation against the backdrop of the current political turmoil in the us and beyond, particularly assessing the beats within the context of political activism as well as cultural politics of identity, gender, ethnicity, lgbt rights and/or environmentalism. The impact of recent works by active beat poets and younger artists influenced by beat aesthetics also play a role.

was founded in 1992 and modelled after the Jack Kerouac school in Colorado. The sfd has become a centre of beat-related and counter-cultural activity since its inception, hosting an array of prominent beat figures, including allen ginsberg, anne waldman, ed sanders, and ruth weiss.