This year, Madrid was the hosting city of the annual event of the association. Between the 27th and the 31st of May, Escuela de Escritores welcomed more than 40 European participants with a remarkable presence of our colleagues from the UK, headed by NAWE’s director Paul Munden 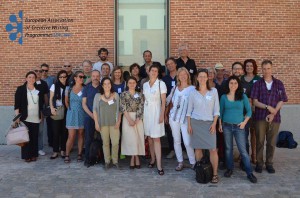 During the evening of the 27th of May, the first EACWP members and participants attending the symposium were convoked to a first meeting dinner around 2 de mayo square, one of the most emblematic and revolutionary spots of Madrid, located also in one of the ever so creative neighborlabs of the city: Malasaña.

The event officially started on the 28th early morning at the Conde Duque’s cultural centre, a former military arsenal now a days devoted to a highly noted public library of Madrid, owning one of the richest  bibliographipc archives of the city.

As part of the symposium opening, president Javier Sagarna welcomed the new group of members and underlined the participation of our colleagues from the UK, some of them representing NAWE (National Association for Writers in Education), the most significant Creative Writing organization in the United Kingdom.

During this past year, as Javier Sagarna explained, there has been an increasing consolidation of new members, which currently gathers more than 20 institutions representing around 16 different countries. «This is a very nice situation because it positions us as the main association in Creative Writing of continental Europe. »

Also, he outlined some of the main topics to be discussed as the main roadmap of the event:

«As Creative Writing schools —Javier highlighted— we have been working mostly isolated over the years and now we have the chance to establish an enriching contact amongst our teachers and students. This is a great opportunity and I encourage you to make the most out of this occasion to propose and develop new cooperation. »

New proposals from the board

Within the frame of the annual board meeting, some of the discussed concerns were manifested by our president on behalf of the EACWP executive members in order to submit them to voting amongst the rest of associated members. These were some of the most remarkable consensus:

As every year, a significant part of the symposium program is committed to the official presentation of the new members either institutional or individual ones. In this opportunity, some of them had  joined the EACWP time before, however, it was their first year attending the event. Also, some new candidacies were directly presented and unanimously discussed amongst our colleagues.

On the last day of the symposium, the participants were divided in two groups of parallel sessions involving mini-workshops, mini-lectures and institutional interventions concerning teaching experiences, which were scheduled in a Pedagogical Day Programme and carried out by some of the EACWP members. All of them exposed and explored a diversity of topics dealing with different approaches to Creative Writing and brought up new perspectives and methodologies to be further developed and revisited in our next pedagogical conference as well as individually reviewed and published on this website:

Restitution and conclusions of the symposium

After Javier Sagarna’s closing speech, some of our members took the floor and shared their own insights and impressions over the symposium:

—Aude Lafait (Belgium): «I am glad to be here because I can see all I’m taking home with me. »

—Reijo Virtanen (Finland): «The best part of these encounters is the discussions that our colleagues held in the corridors between one lesson and another. This means that dialogue is active and alive amongst us. »

—Trisse Gelj: «I’ve found this experience very inspiring and I think we actually get to inspire each other. »

—Alain André: «I think these meetings must encourage and enable the possibility of deepening into actual Creative Writing discussions of our interest. I hope the pedagogical conference to be an occasion to open up an deepen into all these fascinating pedagogical exchanges. »

After three full working days, on the 31st of May, the XIth symposium’s clousure was joyfully rounded off  with a last free session of cañas and tapas amongst the last remaining EACWP members at the Retiro park’s Book Fair of Madrid.