Linda Lappin presents in this work a priviledged sight of the European challenge viewed from her American background along with her twenty years teaching experience in Italy. Lappin is a graduated student of University of Iowa in Creative Writing and has placed her literary work in Europe concerning her search for «narrative landscapes» 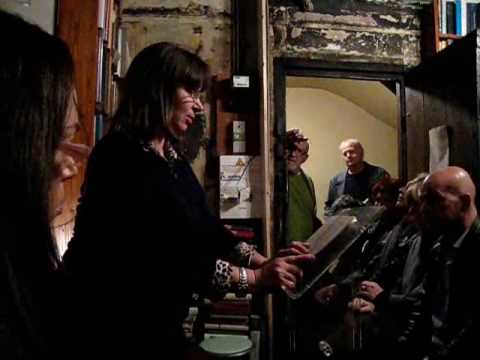 Writing is a solitary activity – alone with your blank page or screen. Writers spend an inordinate amount of time alone, thinking, writing, reading, rewriting, rereading. Perhaps that is why many ( but not all) love to congregate in communities, sometimes producing manifestos or carrying out collective experiments or contests with each other, boasting, bragging, drinking ( often) seducing, exchanging stories, ideas, inspirational substances, writing techniques, books, muses; offering free meals and mutual support, and of course, often the opposite, sharp conflict and lethal rivalry. Such communities need a nucleus that draws its scattered particles to itself by means of elective affinity. That nucleus may be a physical place like a university, library, theater, bookshop or café – it may be a body of ideas, a political creed, or a printing press , literary salon, newspaper; a charismatic leader or even a symbolic figure or an ideal.

European history is constellated with these communities arising in Paris, London, Berlin, St. Petersburg, Vienna, Rome, Prague, Madrid, Warsaw, Athens, (may I add Greenwich Village and San Francisco?) often in direct contact with other such communities elsewhere, operating in different languages and promoting intercommunication through translation. They hold together for a while, then spontaneously combust, subject to changes in the atmosphere. Often, the literature they have produced becomes legend partaking of the zeitgeist – extraordinary moments of genius and creativity which bloom and wither fertilizing other writers across great distances of space and time.

You ask, is there a European identity in the practice of the teaching of creative writing? Of course there is. Its roots go deep into the history of artists’ and writers’ communities in Europe and the rich legacy they have left us – which we find reflected in the activities of the institutions and members of the EACWP and the predilections they display for certain forms, genres, media, techniques, and experiments in literary production pertaining to their specific literary and linguistic traditions.

Here I would like to add: I have become more and more interested in what are called landscape narratives: ways in which stories and imagery are embedded in the landscapes we inhabit, both real and imaginary. Every landscape has its unique genius loci. DH Lawrence, a great European ( and not only English!) writer believed that the spirit of place attracts to itself individuals of like nature, and that all art and writing reflect the spirit of place in which it was created. In that sense, it is the land which imparts something of its character upon the individuals who inhabit it and stamps its image upon their cultural productions. Thus, for Lawrence, not race or provenance but chosen territory is the determining factor of a writer’s identity.

When the Writers Workshop was created at the University of Iowa in 1936, it was founded on three principles: the teaching of writing as an art and as a craft, the offering of academic course credit for creative work, and the creation of a permanent writers community within the academe. These three things together created something entirely new in (modern) higher education. The first two activities had been going on at the University Iowa prior to that time, but it was the last that made the workshop into what it is today: a boiling crucible of contemporary writing (though that hotbed is not without its critics). It was Paul Engle, successor to the founder, who shaped and furthered the vision of the writers community at Iowa, and eventually created a second program there, the International Writing Program, made up of international writers who were given stipends to live a few months in Iowa, and share their work with the students of the University and with each other through readings and the practice of literary translation.

As a graduate student I was lucky enough to work as an assistant to that program and to experience its benefits directly. Engle was a great believer in the idea that when writers congregated to talk about writing they engaged in an activity promoting, ultimately, world peace. Though that may sound grandiose, even naive, I personally believe it is true if only because the shared obsession with writing or art can, sometimes, break down barriers of ideology and cultural difference to create a common ground of communication between the most disparate individuals. After my experiences at Iowa long ago, I find I still have a craving to be part of an international community of writers and writing teachers, which is how I see the EACWP. I like to hear and read about the research and creative experiments going on in Finland, Vienna, Paris, Madrid, or Prague because I find them inspiring for my teaching and writing practice and because this allows me to be part of a wider reality.

My dream? Creative writing can’t exist without creative reading and creative publishing. In this sense the life and work of Virginia Woolf are exemplary. Only when readers, writers, and publishers come together in their eternal triangle of mutual support and pleasure can the art of writing truly thrive. From this triad others form: to foster an international community of writing, creative translation and creative foreign language teaching methods are also needed, such as Glottodrama, a method combining theater and creative writing with foreign language learning. All these things require creative patronage. The fostering of art and writing means economic support for artists and writers, and other forms of subsistence made available to students and professional practitioners of the arts. This in turn requires creative education: young people must be educated to appreciate writing and the arts, and to become passionate readers , writers, story tellers themselves. For this to happen, their culture must recognize the value of its living artists and writers and seek to preserve the uniqueness of its tradition through support for libraries, festivals, and programs through which communities interact with their artists and writers.

Such programs often struggle for legitimacy. Administrators everywhere seem convinced deep down that art and writing are less important to a community than say, sports facilities or new recycling bins. They are viewed as niceties to enjoy during prosperity and to sacrifice as soon as the going gets rough. Margaret Anderson and Jane Heap of The Little Review didn’t have government grants to publish Ulysses in serial form from their Paris headquarters. What they did have, though, was a list of subscribers willing to foot the bill: ordinary people who understood that by their modest gesture they were providing support to a writer and a magazine whose efforts they valued, and which would, unbeknownst to them, bring about enormous changes to literature and publishing.

If the EU truly wants to instill a sense of European identity in its citizens, what better way than to support, celebrate, and reward its writers, artists, literary translators, foreign language teachers, its small literary publishers and journals, its experimental theatres, playwrights, and theatre goers, and of course its creative writing teachers, all of whom contribute to the greater project of humanistic expression. That would be my dream. A Europe in which literature and art are recognized as vital human needs.