During the celebration of  POETRIES conference (August, 15), Jyväskyla University hosted one of the most noted poets from the UK over a weekend full of readings and discussions along with young writers attending the event

Don Paterson inaugurated the evening of the 15th of August in Finland by shooting a question of simplicity to the audience: «Can poetry talk to science?» It is a common belief that bad poetry as well as bad science makes simple things difficult. Paterson noticed that both disciplines should actually behave in an opposite direction: «Both disciplines should try to make difficult things comprehensible by putting them as simple as they can be.»

The lyric principle of writing with sound and sense altogether is one of the main ways to create simplicity in language. Additionally, it has been scientifically proved that different areas of the brain connect by perceiving simplicity through the symmetry of sound and sense. The ancient statement of Heraclitus combines physical law with a beautiful utterance: panta rhei («everything flows».)

Paterson brought into alignment one of the principles of poetry: «Brightness is a property not only of light, but also of sound, shape, taste, emotional mood, and so on, and this is reflected in our speech. Poetry, as usual, refines a linguistic tendency to a strategy. And this binding sense with sound is the basis of the lyric principle.» 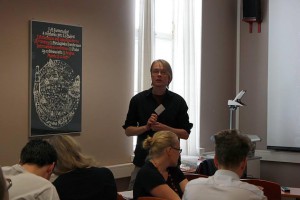 Rhyming is of course a way to show how simple things may be. The symmetry of sounds also connects truth and beauty. Rhyming can also trick the brain and make things feel true. Paterson notices also the positive side of this trick: «The ear will sneak it into the brain much in the way songs lead us to entertain the unthinkable and ideas that our critical senses would quickly reject.» In pre-modern science thoughts were expressed in didactic or allegoric poems because of all these connections with simplicity.

On the contrary, science seems to try to avoid analogies because they are not logical, but it happens often that scientific talk fails because of unsuccessful analogies. For example, the connection between memes and genes is nothing but a bad analogy as Patterson remarks. His interest in analogies goes even deeper: «I think analogies reflect often how our knowledge evolves. When we find a deep analogy and see the same branching motif in a tree, in a nerve, in a tributary system and in a pattern of electrical discharge – it usually indicates a common dynamic process.»

According to Paterson, science can lead poetry from the known to the unknown.  Generally, science is regarded as living in the area of knowledge. Hence, Paterson states: « the poem must demonstrate a ‘pink’  move from the known to the unknown, an uncorrelated leap from a correlated position. And this move defines the kind of ‘inspired move’ we find in physics as much as poetry.» 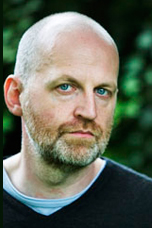 was born in 1963 in Dundee, Scotland. He moved to London in 1984 to work as a jazz musician, and began writing poetry around the same time.

He has published two books of aphorism, The Book of Shadows (Picador, 2004) and The Blind Eye (Faber, 2007), and a compendium, Best Thought, Worst Thought (Graywolf, 2008). He has also edited a number of anthologies.He teaches poetry at the University of St Andrews, and since 1996 has been poetry editor at Picador MacMillan. He continues to perform and compose. His poetry has won a number of awards, including the Forward Prize for Best First Collection, the Whitbread Poetry Prize, the Geoffrey Faber Memorial Award, and the T S Eliot Prize on two occasions. Most recently, Rain won the 2009 Forward prize. He is a Fellow of the Royal Society of Literature and a Fellow of the English Association; he received the OBE in 2008 and the Queen’s Gold Medal for Poetry in 2010.

Department of Arts and Culture, University of Jyväskylä: