The French teacher from Aleph-Écriture imparted a master class to a group of sixteen colleagues of Escuela de Ecritores centered in the workshop he was invited to teach with students: Writing about pictures you shot yourself 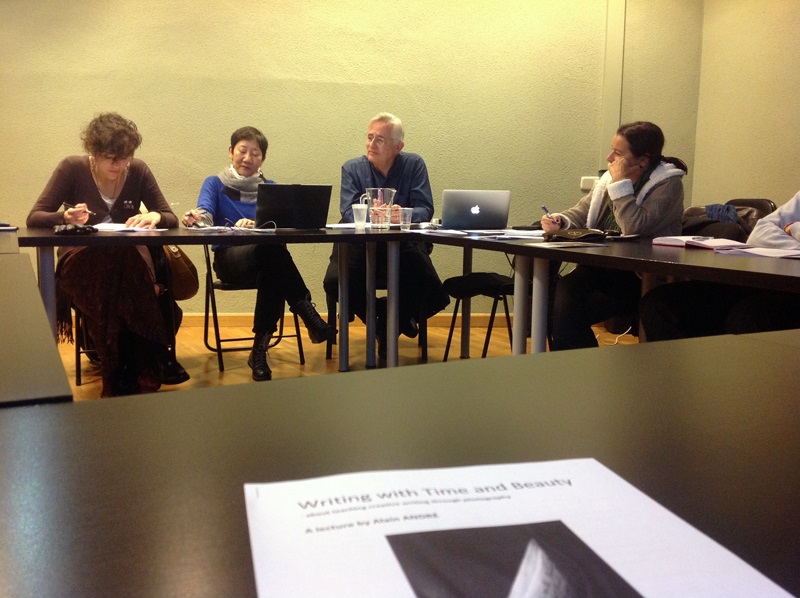 Alain André is an experienced wine-taster. In a table gathering some friends around in a restaurant at Barrio de las Letras, during his visit to Madrid, he performed the way he had learned in Bordeaux how to taste its wine properly so noisely and eccentrically because of the highly astringent vine properties of the region. After his demonstration, he was advised from one of the group not to drink so again in a first date.

«I began doing it when I was about 14, in a small island called Ré, near La Rochelle, at the end of a summer when I had to leave my first love because the holidays were over». However, he was now in front of a class of teachers at Escuela de Escritores, the morning of the 28th of November, assisted by Berna Wang for his translation to Spanish, telling the story of other of his passions, his longstanding romance with photography. He did it though as if he would be relishing a good glass of wine as photographers relish the distillate liquor of light. And his light belongs to La Rochelle, not to Paris nor Toulouse, but to its blue cold sky of the Atlantic coast. 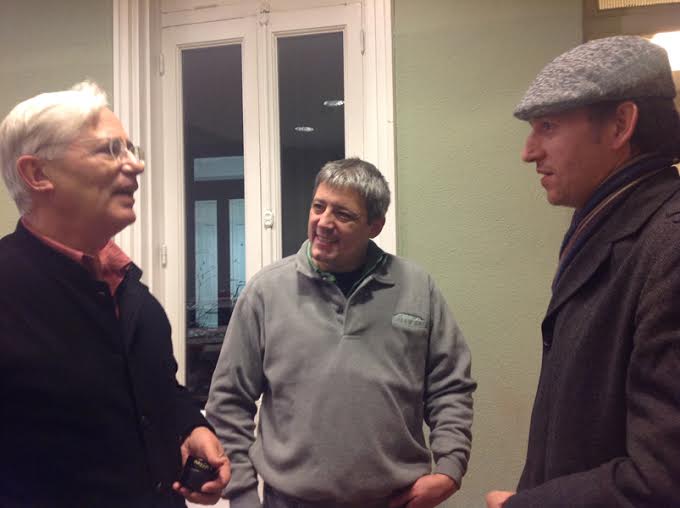 Alain André did as his father and his grandfather had done at his age: bought a good camera and a small lab, and tried not to shoot pictures, but to practice «photography». He says he still enjoys shooting pictures as an amateur and uses them when he is writing. «There is nothing new in this, it is just an ordinary way of documenting fiction. Shooting pictures is the same as taking notes». Actually, some of his literary works have been a result of of a publisher’s suggestion not exactly for «graphic novels» but for novels derived from a set of pictures. Photopgraphy and writing have accompanied him side by side in his interest for fragmental fiction, although as he reminded us in his master class «any of your obsessions could be combined with writing».

Over his three hours lecture, André stood his speech upon his own tripod. 1. His relationship with photography and his own background and experience. 2. What he suggests to students, as a creative writing teacher, in this direction of photography. 3. What he stands for, as it comes to teaching.

One of the two important remarks he highlighted about his workshop with students is, firstly, the idea that pictures are but a pre-text, an excuse and a preparation for the act of writing; secondly, that teachers might be committed to help students to avoid redundancy between the image and the text.

His workshop Writing from the pictures you shot yourself, as he explained, included an experience where students are the photographers themselves. «I’m teaching three two hours and a half long courses. In the first one, I gather their questions and they write about their own relationship with photography».

At the end of it, he suggests, between the first and the second lesson, some shooting experiences. «They choose a street, where they want. They use dynamics first (the photographer is endlessly moving), then cinematic (they elect a small animated group), and eventually statics (with a series of selfportraits). They’ll choose and show with the video-projector a maximum of ten pictures». 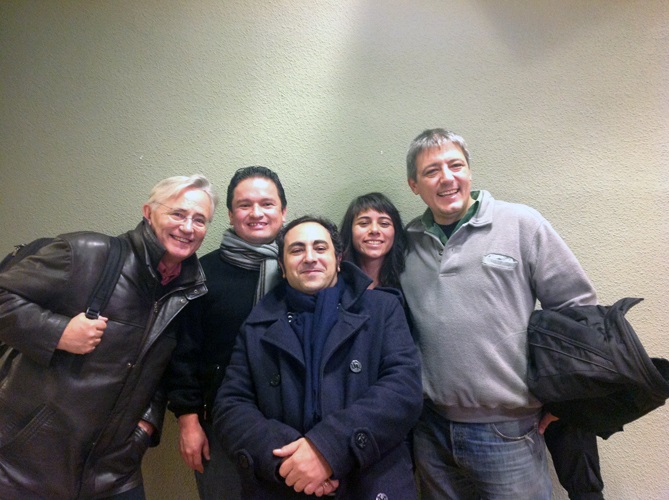 So, the students expose their work and get feedback about their pictures and right after they have to elaborate a small project. «The project must articulate the 10 pictures and 10 texts, in a way or another. They suggest a treatment, receive feedbacks, and must produce a part of the project, in order to present it to the group».

After presenting the workshop he was running for Escuela de Escritores’ students, the director of Aleph-Écriture carried on exposing to teachers different class experiences for begginers as well as complex guided projects and manuscript-readings  for advanced students that have been thoroughly rehearsed in the French school.

Finally, reaching the end of the encounter, Alain offered to his colleagues for the round of questions some cannelés bordelais, a tasty French pastry that he had brought from La Rochelle and that was originally made by nuns of the Annonciade in the 18th century.

Alain André does not believe in nuns nor astrology. Although he plenty enjoys cannelés with black coffee as much as he cherishes conversing with his own light from time to time. Maybe this is what he just naturally taught us during his visit about both photography and writing.

Some dialogues between Alain André and Escuela de Escritores’ teachers 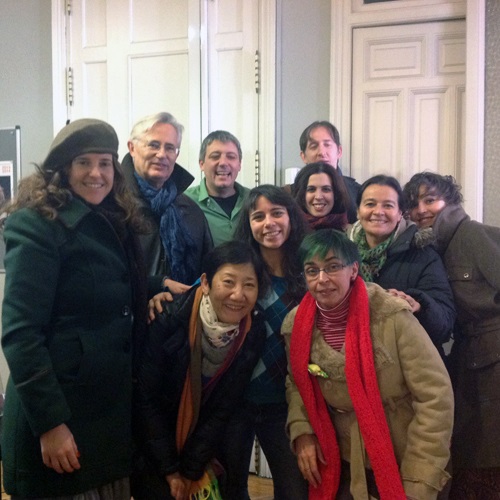 Isabel Calvo: I always insist to my novel students that an excess of documentation might bring down fiction itself in their work. You have mentioned that for your last novel you shot around thousands of pictures. To what extent isn’t that counterproductive for writing?

Alain André: You carry on the shooting without actually realising. However, the idea is to go through a selection afterwards, whose principle criteria would not be to chose the most artistic pictures but the ones that would help students to write. What is important about photography and documentation is not only how many pictures you shoot but the fact that we are forced to go out of our own solitary immagination and somehow see what’s going on out there in the world.

Javier Sagarna: Fundamentally, short stories for me are emotional processes. Regarding this, I would like to highlight what Alain has remarked about the fact that what is important in fiction is not its correspondece with reality. In other words, what is important about photographies is not his documental value but the vibration and depth that those images could potentially have in each of us.

Alain André: Indeed, what afterwards entails some real pedagogical interest is the emotional drive that a set of pictures may have for our students.

Silvia Fernández: Don’t you think that as photographies work especially with eyesight our students’ texts could turn too visual and lack from a wider complexity coming from the other senses?

Alain André: I remember that when my first novel was published, it was considered as a novel of a great visual quality, whatever it means, and then I received suggestions from publishers, when they needed writers to write from pictures. But, indeed, in this course there are several proposals not only to exercise eyesight but to also stimulate the other senses.

Berna Wang: What happens to me is that pictures never turn to be afterwards the same as I had seen them myself live. That’s why, instead, I always shoot imaginary pictures, but my imaginary pictures are actually poems I need to write in order to capture the whole experience of the picture.

Alain André: Actually, what you are commenting is also an experience that we often propose in workshops. The suggestion to our students is to write about pictures of their life that have never been shot. It is called «projective immagination». The idea is, as it is suggested, to capture the progression of immagination in one picture that will be shot by writing it.