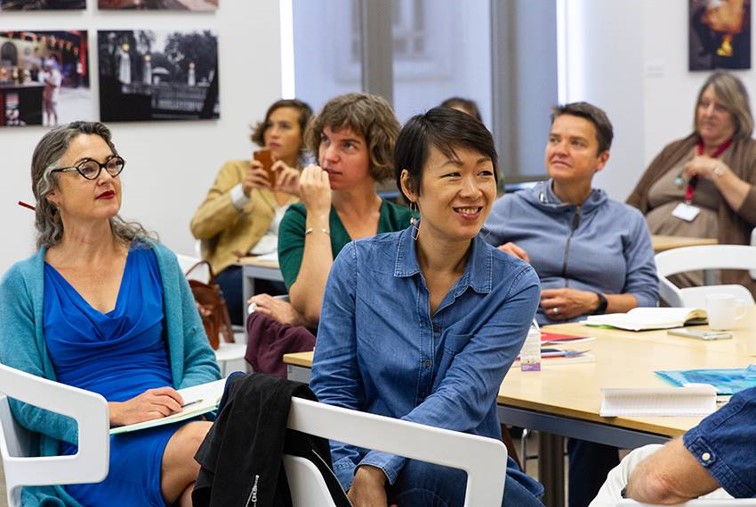 Founded in 2010, the EACWP is the most representative association of creative writing in continental Europe, embracing 29 institutional members and more than 15 European countries. English is the official language of the organization. Nevertheless, one of its principle aims is working for a multilingual Europe and promote creative writing in all its wonderful and diverse European tongues, including English.

The principle aim of the EACWP is to promote, strengthen and enhance collaborative programs, pedagogical tranining and exchange amongst colleagues and institutions involved into the creative writing field, especially, but not exclusively in Europe.

“Dreaming seriously” about “Writing Europe” from both a literary and pedagogical perspective is the ultimate mission to which the EACWP has devoted its institutional efforts over the past years.

The activity of the EACWP focuses on all forms and possibilities of creative writing. Teachers training, pedagogical exchange and debate, learning and practising, theory and academic research, design of CW curricula, mapping of CW in and outside Europe, literary criticism, literary translation, publishing, multimedia and digital implementation.

Amongst its main events, the EACWP organises an anual symposium, a bianual International Pedagogical Conference and an anual Teachers Training. Also, thanks to its strenghthened and consolidated network, the EACWP offers and promotes bilateral cooperation such as its Teachers Exchange Program. Thanks to this program teachers from all over Europe travel around schools and universities to impart their courses to other European students.

Additonally, over the past years, the EACWP has taken part into the following UE Eramus+ multirateral projects:

Ultimately, in 2018, the EACWP launched its own Flash Fiction Contest, in which around 2000 participants has participated in each edition and in almost 15 different European languages: Catalan, Czech, Danish, Dutch, Finnish, French, Hebrew, Portuguese, Spanish, Turkish, Swedish, Norwegian, German and English.

The highly successful International Congress of Creative Writing Programmes, organized by the German Literary Institute Leipzig (in ass. with Konsthögskolan Valand/Göteborg, Literární Akademie/Prague & schule für dichtung/Vienna) in March 2005, showed both the need and the desire for international cooperation in this area to be established in continental Europe. Josef Škvorecký Literary Academy (Prague) has therefore decided to initiate the launching of the European Network of Creative Writing Programmes (ENCWP). Between 2005 and 2009, five ENCWP symposiums took place in Prague.

In September 2010, during its 6th symposium in Madrid, ENCWP adopted its new statutes, consolidating five years of work under the emerging name of EACWP.

Each symposium is annually organised by a different EACWP partner. During the event, the EACWP members are invited to present their recent pedagogical work in their own countries and institutions and meet current and new colleagues in order to enlarge and strengthen our collaborative network. Therefore, one of the ultimate objectives of this event is to foster the pedagogical interchanges among EACWP members, design new plans for the future and discuss further cooperation programmes. Traditionally, the last day of the symposium is entirely devoted to a representative sample of lectures and workshops, proposed by our different EACWP members.

During the biannual International Pedagogical Conference, worldwide colleagues and institutions are encouraged to join the pedagogical debate and interchange. Teachers, writers, translators, researchers, scholars and all different professionals working in the creative writing field participate by offering a varied series of lectures, workshops and round tables, aiming to bring forth and nurture the different discussions concerning the creative writing practices. The EACWP has organised so far four pedagogical conferences in 2012 (Paris), 2014 (Finland), 2016 (Turin), 2018 (Brussels) and the next one will be celebrated in Norwich (2021).

The EACWP has 29 institutional members from 15 different countries and about 30 individual members. Thanks to a mutual agreement of membership, the EACWP cooperates with NAWE (National Association of Writers in Education / UK) and the Association of Creative Writing Programs of the America in Spanish (Red PEA).

EACWP Working Team
The Board